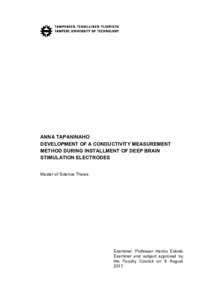 The primary goal of this thesis was to examine different methods used for conductivity measurement and collect brain tissue conductivity data published in 2000 or later. These methods include e.g. intracerebral technique, electrode impedance tomography and MRI-based methods. This thesis includes studies made on both living humans and animals in addition to studies conducted on post-mortem tissue samples.

The final goal of this thesis was to develop a novel conductivity measurement method during installment of deep brain stimulation electrodes. The device used is a clinician programmer used for example in deep brain stimulation, called N’Vision by Medtronic. Thus, the method measures the conductivity directly from the brain tissue. The method has it challenges, such as control of the tissue environment, but we believe that the developed method can be used in brain tissue conductivity measurement.