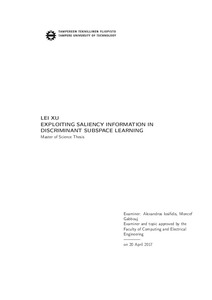 The objective of this thesis is to investigate a new linear discriminant analysis method, which could overcome underlying drawbacks of traditional Linear Discriminant Analysis (LDA) and other LDA variants targeting problems involving imbalanced classes. Traditional LDA sets assumptions related to (Gaussian) class distribution and neglects influence of outlier classes or sample structure inside class, that might affect performance. We exploit intuitions coming from a probabilistic interpretation of saliency in order to redefine the between-class and within-class scatters in a more robust, with respect to outliers and class cardinality invariant, manner. The proposed method is named as Saliency-based weighted LDA (SwLDA).
We propose several associated SwLDA variants and evaluate them on six publicly available facial image and three imbalanced datasets. Comparing to traditional LDA and other weighted LDA variants, the proposed SwLDA shows certain improvements on facial image classification and class-imbalanced classification problems. The best improvement for our approaches is 11.14% on BU dataset, comparing to traditional LDA.