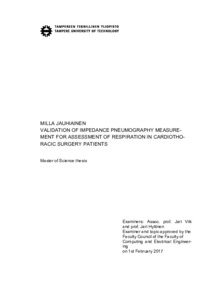 Impedance pneumography (IP) is an indirect method of assessing respiration by measuring bioimpedance of the thorax. Conventionally respiration is evaluated by measuring the volume of air inhaled and exhaled during forced spirometry manoeuvres: these patterns require skills and cooperation from the patient, and strong guidance from the physician. IP provides a comfortable alternative for the patient, since the results do not depend on the performance of the patient. Purpose of the work was to assess the agreement of IP measurement and pneumotachography (PNT), which was used as a reference method.
Open-chest surgery intrudes chest anatomy and physiology and decreases the functions for several days after the surgery. Pain and medication also complicate respiration, and postoperative complications, such as air leak or pneumothorax are common. Thus, an effective method for measuring respiration with minimal effort from the patient is needed to evaluate the physiotherapy needs and recovery. IP is a promising method for this purpose.
The study population was 136 patients with elective cardiac operations, pulmonary resections and minor pleuropulmonary surgeries. The study was conducted during the normal episode of care in the hospital one day before the operation and for 1–3 days after the operation. Simultaneous IP and PNT measurements were conducted for one minute.
The linearity of IP and PNT was evaluated by calculating the sample-by-sample difference and average deviation from the linearity in different phases of the respiratory cycle. The results showed that there was no difference in linearity in the three surgery groups before and immediately after the operation. Also, difference between the groups in the same measurement day was not detected.
The study indicates that thoracic surgery does not change the linearity properties of IP, thus it can be used to evaluate the recovery of the surgery patients by assessing the lung functions. It should be considered in further studies, whether some changes in the linearity were due to fluid accumulation in cardiac patients, or for some other reasons.