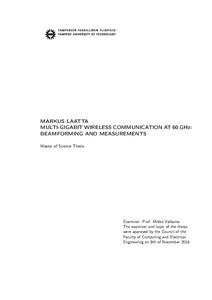 Usage of wireless communication systems has been growing steadily during the past decades as more and more services and users are starting to utilize various cloud based systems. Need for higher data rates and the exponential increase of users are becoming significant difficulties for the current wireless communication systems. To tackle this problem, frequency bands of several gigahertz have been suggested for the next generation of local and personal communication systems (WLAN/WPAN). The extremely large unlicensed band at 60 GHz is an attractive option to provide multi-gigabit data rates over short distances. However, even at short distances systems have to compensate the poor link budget which is due to increased frequency and bandwidth. To mitigate these losses, highly directional communication with antenna arrays and beamforming is proposed.
IEEE 802.11ad standard is one of the most promising millimeter wave standards to offer multi-gigabit data rates for WLAN/WPAN use. In comparison to the legacy IEEE 802.11 standards, the IEEE 802.11ad introduces completely new medium access control (MAC) and physical (PHY) layers due to highly directional communication.
This thesis studies the IEEE 802.11ad standard, focusing on the renewed MAC and PHY layers, beamforming mechanisms, and overall performance in a home environment. While previous academic work has included measurements at 60 GHz, these measurements have been limited to laboratory and office areas which do not realistically model an actual end-user environment. Additionally, the measurement equipment in these research papers has not explicitly implemented the IEEE 802.11ad standard. Hence, measurements in this thesis are conducted with a prototype implementing the mandatory parts of the standard resulting in a more thorough realization of the performance. The results indicate that the prototype performs well in a home environment. Overall, theoretical PHY data rates of above 2 Gbps are to be expected in most cases if operated in similar environment.