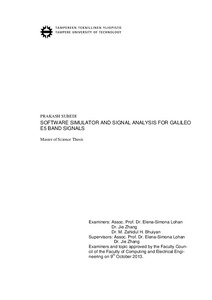 Galileo is the European Global Navigation Satellite System (GNSS) that aims at providing high availability, increased accuracy, and various location services under the civilian control. Four in-orbit validation satellites have already been launched till date and the system is estimated to be fully deployed by the year 2020. The Galileo navigation signals are transmitted at four frequency bands, which are named E5a, E5b, E6, and E1 bands. The signal of interest in this thesis is Galileo E5a band and Galileo E5b band signals.
Signal acquisition and signal tracking are the main functions in a GNSS receiver. Acquisition identifies all the visible satellites and estimates the coarse values of carrier frequency and code phase estimates of the satellite signal. Tracking refines the coarse carrier frequency and code phase estimates, and keeps track of the satellite. The objective of this thesis has been to design and implement Galileo E5a and E5b signals receiver which can acquire all the visible E5a and E5b signals and which gives coarse estimate of carrier frequency and code phase. Such a receiver has been successfully designed in Matlab starting from the Matlab initial files provided by the Finnish Geodetic Institute (FGI) provided tool.
In this thesis, two different software implementations are analyzed: 1) The acquisition and tracking of simulated Galileo E5a signals generated in the Matlab Simulink E1-E5 model; and 2) The acquisition of real-time Galileo E5b signals received from the satellite provided by Finnish Geodetic Institute (FGI), Masala, Finland. In the Simulink implementation, the whole E5 signal is generated and propagated through different channel profiles. The received signals are tested with acquisition and tracking and the results are compared for different channel profile and Carrier-to-Noise density ratio. Similarly, the real-time Galileo signals from four satellites now available on sky from the Galileo constellation were received and performed acquisition. In both implementations, a sharp triangular peak was observed at the rough frequency and code phase estimates, proving that the Galileo E5a/b signals can be indeed acquired correctly with the implemented simulator.