The Petasis-Borono Mannich Reaction in Glycerol 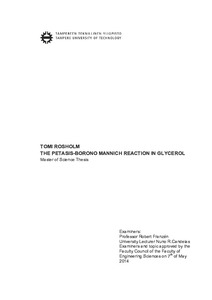 The Petasis-Borono Mannich (PBM) multicomponent reaction between an amine, aldehyde and vinyl- or arylboronic acid is a highly versatile chemical reaction which can be used in the preparation of large libraries of organic compounds using differently substituted starting materials. These substrates are readily available and the reaction can be run in mild conditions in a number of organic solvents including water. Organoboron acids are in addition stable, non-toxic and environmentally friendly.

The rapid development of biodiesel industry is generating a tremendous amount of crude glycerol as a by-product and new findings for its use are highly desirable. Glycerol has been found to be an interesting green reaction medium in organic synthesis, both with and without the help of a catalyst. In some cases, the use of glycerol as a solvent has enhanced the effectiveness and selectivity of the reactions and allowed easy product separation and catalyst recycling.

The theory section of this Thesis is divided into two parts. First the details of the Petasis-Borono Mannich multicomponent reaction are explored and the mechanistic considerations of the reaction are discussed. In the second part the use of glycerol as a green solvent in organic synthesis is explored and some organic reactions where it has been found to be a successful or even beneficial reaction medium are highlighted.

The aim of this Thesis was to study the viability of using glycerol as a green reaction medium for the Petasis-Borono Mannich reaction. The reaction was studied with a variety of substituted arylboronic acids, salicylaldehydes and secondary amines using glycerol as the solvent. The PBM reaction was used in the preparation of 2H-chromene compound and the reaction was also tested in crude glycerol acquired from biodiesel production.

No general enhancement of the reaction performance was observed compared to other solvents mentioned in the literature. The outcome of the reaction was highly dependent on the activating nature of the substituents in the arylboronic acid with aryl activating groups giving products in good to very good yields while deactivating groups and steric effects dropped the yields noticeably. The yields could be improved by raising the reaction temperature. A number of secondary amines were found to be successful in the reaction whereas indoline outperformed the others, while substituents in the salicylaldehyde decreased the yields slightly.

It was shown that glycerol promoted the 2H-chromene formation better than water giving the product in excellent 94 % yield. The use of crude instead of pure glycerol was found to offer no promoting effects in the PBM reaction and gave the product in slightly lower yield compared to pure glycerol. However, the yield was still high enough (84 %) to warrant more research into using crude glycerol as the reaction medium for the PBM reaction.

Thus, based on results gained in this thesis, glycerol can be used as a sustainable solvent for the Petasis-Borono Mannich reaction giving comparable results to other solvent systems reported in the literature. This extends the solvent library for this useful multicomponent reaction and also further promotes the utilisation of glycerol as a sustainable reaction medium for organic synthesis.