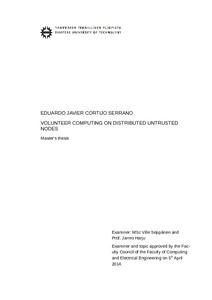 The growth in size and complexity of new software systems has highlighted the need of more efficient and faster building tools. The current research relies on automation and parallelization of tasks dividing and grouping software systems in dependent software packages. Some modern building systems as Open Build Service (OBS) centralize sources commitment and dependencies solving for Linux distributions. After, they distribute these heavy build tasks among several build hosts, to finally deliver the results to the community.
The problem with these building services is that as they are usually supported by non-commercial communities, the resources to maintain the build hosts are less. Because of this, the idea of distributing these jobs among new building hosts owned by volunteers is tempting. However, carrying out this idea brings new challenges and problems to be solved, concerning the new pool of untrusted, unreliable workers.
This thesis studies how the concept of volunteer computing can be applied to software package building, specifically to OBS. In the first part, the existing platforms of volunteer computing are examined showing the current research and the pros and cons of using them for our purposes.
The research of this thesis led to a different solution called Volunteer Worker System (VWS). The main concept is to provide a centralized system that serves OBS reliable trusted workers compiling the results sent by the volunteers. Each worker acts as a proxy between the untrusted volunteers and the OBS server itself, validating by multiple cross-checking the results obtained. The volunteers from the volunteer pool are grouped to serve each surrogate depending on OBS needs.
A simple proof-of-concept of the designed system was set-up on a network distributed environment. A host acting as Volunteer System groups and dispatches jobs coming from a host simulating OBS server to several volunteer workers in separate hosts. These volunteers send back their results to the Volunteer System to validate and forward them to OBS Server.
Ensuring security on the designed solution is one of the needs to deploy the system on a real-environment. The OBS instance receiving the volunteers work needs to be sure that the Volunteer System offering them is fully trusted. Also, a whole front-end system to attract and maintain volunteers needs to be implemented.