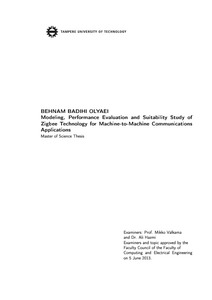 The number of nodes in current communication networks, specially in wireless technology, is increasing day by day. At the same time, the communication concept is changing from being mainly human to human (H2H) toward machine to machine (M2M). On the other hand, the objects and devices will become part of future Internet in which the concept of connectivity will change from anywhere, anytime for anyone to anywhere, anytime for anything by introducing Internet of Things (IoT). Therefore, it is expected that billions of objects will communicate to each other physically and virtually through the Internet. When these numbers of devices, usually very high, are connected to the Internet to form the IoT network, the first challenge is to adjust the basic connectivity and networking layers between them. On the other hand, end point users must operate with battery for many years since replacing them is impossible due to the high number devices. Currently, we witness an increasing momentum for wireless industry to explicitly take into account the key M2M requirements, such as lower complexity, reduced implementation and operation costs, broader coverage range and higher energy efficiency. The IEEE 802.15.4 standard is presently being used for wireless sensor networks and ZigBee applications characterized by similar requirements as in IoT and M2M applications. The ZigBee technology based on IEEE 802.15.4 standard is mainly targeting LR-WPAN applications.
Due to importance of wireless sensor networks (WSN) in future M2M communications and because of the lack of comprehensive study of IEEE 802.15.4 in different frequency bands and different channel scenarios, this thesis evaluate the performance of the IEEE 802.15.4 using system level simulator developed during this work. The performance evaluation is carried out in terms of network throughput, energy consumption, and end-to-end delay. In addition, the performance comparison is accomplished between slotted IEEE 802.15.4 and IEEE 802.11ah (one of the most promising candidate standard for the IoT applications).
The results show that the IEEE 802.15.4 is a suitable standard in terms of energy consumption in congested networks but not in throughput point of view.