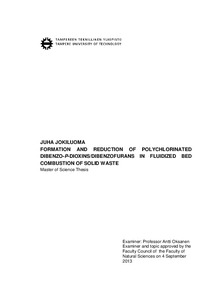 Polychlorinated dibenzo-p-dioxins/dibenzofurans (PCDD/Fs) are proven to possess high biological toxicity. They are formed in large quantities in industrial waste combustion processes. The formation of PCDD/F in grate-fired municipal waste incinerators (MWI) is widely investigated unlike the formation in fluidized bed (FB) boilers.
This work aims to define the key differences in the formation of PCDD/Fs between grate-fired and FB boilers using solid waste as fuel. The theoretical part of the work involves a comprehensive review of the formation and reduction of PCDD/Fs in waste combustion. The experimental part consists of participating in two PCDD/F measurement campaigns at FB boiler plants and the analysis of the results.
The main PCDD/F formation routes in thermal processes include the high temperature gas phase formation from precursors (pyrosynthesis), the condensation of precursors on surfaces of metal catalysts (precursor mechanism), and the formation from residual carbon in the fly ash in presence of a catalyst (de novo synthesis). Two latter pathways take place in post-combustion zone at temperatures from 200 to 500 ºC and they are suggested to be mainly responsible of the overall PCDD/F formation.
The key factors promoting the formation of PCDD/Fs include incomplete combustion of the fuel, oxidizing atmosphere, presence of chlorine, residual carbon in the fly ash, favorable temperature window, and copper catalyst. Copper (chloride) is found to highly enhance the formation of PCDD/Fs. The change in different forms of copper is found to depend on temperature, which could partly explain the ‘temperature window’ of PCDD/F formation. Therefore, the flue gas residence time in this region should be minimized.
Sulfur-, nitrogen-, and calcium-based compounds are found to inhibit the formation of PCDD/Fs. SO2 in the flue gas may participate in the formation of metal sulfates from copper chlorides, thus reducing the active sites of the copper catalysts. Addition of CaO or CaCO3 into the flue gases may reduce PCDD/Fs due to their capability to adsorb PCDD/Fs or by changing the pH of the fly ash towards the alkaline side.
Flue gas cleaning devices, especially electrostatic precipitators (ESP), may offer a favorable framework for PCDD/F formation if operated at temperatures above 200 ºC. Bag house filters with prior injection of additives can effectively reduce PCDD/F emissions (up to 99.5%). Catalytic decomposition of PCDD/Fs is the only method that will destroy the PCDD/Fs, not only transfer the problem elsewhere.
The PCDD/F congener patterns (fingerprints) from grate-fired boilers and FB boilers possess great similarity, thus the governing formation routes are similar in both cases. The main factors causing dissimilarities in the fingerprints involve fuel properties (amount of copper and chlorine) and fly ash characteristics that are influenced by the combustion technology and feeding of additives. Differences in the gas/solid partitioning between different technologies are suggested to mainly depend on the fly ash characteristics, and differences in the sampling temperatures and methods.