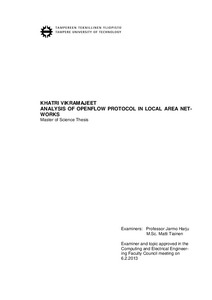 Master's Degree Programme in Information Technology
This publication is copyrighted. You may download, display and print it for Your own personal use. Commercial use is prohibited.

The traditional networking infrastructure is still static in nature due to its complexity, vendor dependence and QoS requirements. Software Defined Networking (SDN) is aimed at surpassing the limits of traditional networking infrastructure and making it a dynamic network. In SDN, for a single change in network, the network configurations are changed only at central or some specific controller(s) rather than touching individual network devices.

One of the SDN protocols ‘OpenFlow’ is a normal application layer protocol, which is encapsulated inside TCP, IPv4 and Ethernet format. In this thesis, the integration and benefits of OpenFlow protocol in LAN environment have been analyzed. OpenFlow controller is the heart of the OpenFlow network, and in centralized hierarchy it poses a single point of failure and risk of DoS attacks. In an OpenFlow network, the switch follows its flow table to make forwarding decisions and rejects its traditional forwarding table. The flows must be carefully configured, since a mismatch leads to packets being forwarded to OpenFlow controller that may decide to broadcast packets, and lead to a drastic reduced throughput from 941 Mbps to approx. 340 Kbps in Gigabit network.

All the flows were manually configured and installed to switches via OpenFlow controller making the network again static in nature. In order to handle the dynamic network, an automation framework can be developed that adds or remove flows respectively. The flow concept can be interpreted as avoiding routers in a network, but in fact flows do not override the features of a router.

The benefits of OpenFlow in LANs include an independent and programmable control over the network. The conducted experiments have demonstrated its successful integration inside a single subnet in LANs. However, a full integration with LANs could not be achieved due to the lack of support for layer 3 protocols and OpenFlow’s slow integration into hardware. In addition, the deployment models are not well-suited to the service providers. OpenFlow protocol is more suited to the data centers or backbone networks to handle growing data, and smaller networks like campus area networks to isolate the research traffic from the network traffic.