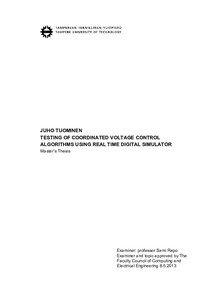 Since the use of renewable generation and small generation units is fast increasing in the power network, Distribution Network Operators (DNOs) need to reconsider the ways they are designing and controlling their networks. Traditionally generation units have been connected to the high voltage transmission network, but since many of the new Distributed Energy Resources (DERs), like solar power plants and wind turbines, are located far from the transmission network and at the ends of the distribution network, it is more cost effective to connect them to the distribution network instead. However, the distribution network has not been planned to have generation units connected to it and this can cause multiple problems with both the safe use of the network and the capacity of the feeders connecting the DERs. Coordinated voltage control has potential to solve or mitigate these problems by using the existing network more effectively.
During this thesis two coordinated voltage control algorithms created during the Adine project and the SGEM program were tested using the Real Time Digital Simulator and real distribution network data received from Koillis-Satakunnan Sähkö Oy. The first algorithm is called the rule based algorithm and it reacts to the voltage limit violations by following a preset order of rules. Its basic control part controls the tap changer of the primary substation transformer and the real and reactive power set point values of the generators connected into the network. The algorithm also contains a restoring part, which is used to undo the changes of the basic control part when network status allows for it. The other algorithm is called the optimizing algorithm and it uses Matlab optimization function to find the most optimal way to use the same resources as the rule based algorithm uses. The algorithms employ a state estimation of the network using data of the network components and status of the loads and generators in the network.
The algorithms were tested using 12 sequences, during which multiple different variables were changed to test the algorithms reaction to different network states. The results from these simulations are presented in a form of metric values derived from the raw data and as graphs portraying some of the key values, like the network maximum and minimum voltages and the power outputs of the distributed generators. The simulation results affirm that the algorithms do not contain any logical or design errors, but both algorithms could still be developed further. The optimizing algorithm is still missing few functions that have been planned to be part of it and this affects its efficiency in certain situations. In most cases, the optimizing algorithm is performing superiorly compared to the rule based algorithm, but this is mainly because the optimizing algorithm executes all of the control actions simultaneously, whereas the rule based algorithm controls one resource at the time. The rule based algorithm could be upgraded to improve the deduction process and to execute all of the changes at the same time, possibly making it able to compete with the optimizing algorithm in efficiency.