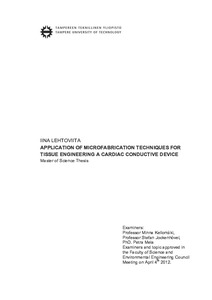 Impairment of the atrioventricular electrical conduction (AV-block) is a major cause for the implantation of an electronic pacemaker device. Even though this is the standard treatment today, it has its disadvantages. One major problem is the implementation of long-term pacing therapy in pediatric patients owing to the restrictions imposed by a child’s small size and their inevitable growth. Thus there is a genuine need for innovative therapies especially for children with cardiac rhythm disorders.
The aim of the Biopacer project is to develop an autologous conductive tissue device that will serve as an electrical conduit between the upper and lower chambers of the heart. The idea is to use pediatric cardiomyocytes together with a fibrin-based scaffold to produce a tissue construct that is completely autologous and has the ability to grow with the patient. Mimicking the complexity and highly organized structure of native cardiac tissue sets significant challenges for the engineering process. To address this challenge, bottom-up tissue engineering, in which structural components of different cell types with high-degree organization are fabricated separately and later assembled together, was applied. The aim of this thesis was to utilize different microfabrication techniques for the realization of the fibrin scaffold with different cell types to fabricate building blocks for the assembly of a conductive tissue device with a controllable, spatially organized tissue microarchitecture.
Two methods, micromolding in capillaries (MIMIC) and microfabrication of fibrin fibers by extrusion, were established and exploited in the fabrication of cell-seeded 3D fibrin tissue modules. Using the MIMIC technique, cells were spatially confined into a 3D fibrin gel structure and they were shown to align longitudinally in small diameter fibrin gels. In extruded fibrin fibers, endothelial cells were demonstrated to coalesce and bundle the surrounding fibrin into a core around which they arranged themselves resembling the phenomenon of tubulogenesis. The organization of these microfabricated tissue modules together to create a conductive tissue device consisting of separate functional units (e.g. aligned cardiomyocytes, vasculature, extracellular matrix) was additionally displayed. This way, all the structural components of native cardiac tissue are accounted for and highly organized in the engineered construct.