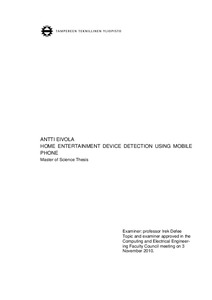 Development in mobile technology and computer vision enables new usage scenarios related to these technologies. Open source mobile application frameworks together with open source software libraries for computer vision provide the means for developing applications with relatively low effort. This thesis presents a modified version of a popular object detection method and utilizes this in two separate mobile software implementations. The main goals are to assess if interesting end-user applications can be developed with these open source tools and to propose a possible solution for the parts that are not adequately covered by the readily available software components.
The thesis is divided into four parts. The first part deals with a popular object detection method from the literature and second part proposes improvements for this method. Next the two implementations, using the proposed method, are presented that enable the user to detect and control home entertainment devices using a mobile phone with a camera. The thesis is concluded with an evaluation of the performance of the proposed method and discussion.
The proposed method adds additional restrictive checks to the popular object detection method and, for the concerned scenarios, performs better than the readily available implementation. The two applications implemented for this thesis show an example of what can be achieved with computer vision and a mobile phone. Both applications fulfil the goals set for them and can be used to detect objects seen in the live video feed from the mobile phones camera. One of the implementations also provides an interface to interact with the devices once they are detected.