Effect of reduction of respiratory complex I on Drosophila melanogaster lifespan 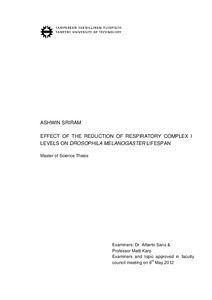 Respiratory Complex I is the main generator of Reactive Oxygen Species (ROS) inside the cell. ROS are generated during aerobic respiration, which occurs inside the mitochondria and generates most of the energy used by aerobic organisms. In this study we have provided evidence supporting the Mitochondrial Free Radical Theory of Aging (MFRTA), which states that ROS, produced inside the mitochondria cause aging. To test this we have utilised the power of Drosophila genetics to study the effects knocking-down one of the subunits of Complex I has on the Complex I assembly, energy homeostasis, and lifespan in Drosophila melanogaster.

A series of crosses were performed, in which an RNAi construct for the gene CG6020 (encoding the 39kDa subunit of complex I) was combined with ectopic expression of the yeast Ndi1 protein to compensate the redox disequilibria caused by a lack of NADH re-oxidation in flies expressing only the knock-down. Both the RNAi construct and the NDI1 transgene were expressed using the binary UAS/GAL4 expression system. The resulting progeny were used to evaluate the knockdown of Complex I and to perform lifespan studies and complementary experiments.

The knockdown of the nuclear encoded subunit of complex I (CG6020) was verified at the RNA level, protein level and at the whole-complex level by qPCR, western blotting and Blue Native Gel electrophoresis, respectively. The decrease in complex I respiration was also quantified by polarographic measurements using an Oroboros instrument (Oxygraph 2k), and the change in hydrogen peroxide production was studied in isolated mitochondria. Moreover, other physiological parameters –fertility, activity, food intake- were also studied to understand how longevity was affected in flies expressing the complex I knockdown.

The results from shown here illustrate that, the knockdown of the 39kDa subunit (encoded by CG6020) specifically decreases the concentration of complex I. This specifically affects complex I-linked respiration, and at the same time reduces the generation of hydrogen peroxide in isolated mitochondria. Moreover, knock-down of complex I increases life-span without affecting fly mobility or food intake. Despite a few shortcomings, substantial evidence has been provided to show that, the increase in life-span of the flies is only due to reduction in the concentration of complex I.