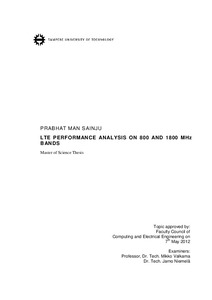 Long Term Evolution (LTE) is a high speed wireless technology based on OFDM. Unlike its predecessors, its bandwidth can be scaled from 1.6 MHz to 20 MHz. Maximum theoretical throughputs from the LTE network in downlink can be estimated to range over 300 Mbps. The practical values are however limited by the channel overheads, path loss and cell loading. Its ability to deliver high throughput depends upon its radio access technology OFDM and the high bandwidth usage as well.

The other important feature of LTE is its usage in multiple bands of spectrum. The primary focus in this thesis is on 800 MHz band and its comparison with 1800 MHz band and UMTS coverage. Coverage, capacity and throughput scenario are the essential dimensions studied in this thesis. A test network was set up for LTE measurement and the primary measurement parameters such as RSRP, RSRQ, SINR and throughput were observed for different measurement cases. The measurement files were analysed from different perspectives to conclude upon the coverage aspect of the network.

The basic LTE radio parameters RSRP, RSRQ and SINR tend to degrade as the UE moves towards the cell edge in a pattern similar to the nature of free space loss model. In a way, these parameters are interrelated and eventually prove decisive in the downlink throughput. The throughput follows the trend of other radio parameters and decrease as the UE moves towards the cell edge. The measured values have been compared to the theoretical results defined by link budget and Shannon’s limit. The comparison shows that measured values are confined within the theoretical constraints. Theoretical constraints along with the minimum requirements set by the operator have been used to measure the performance of the sites. Similar analysis was also performed with the LTE 1800 network and UMTS 900 network and the result was compared to the coverage scenario of LTE 800. Higher slope of attenuation was observed with LTE 1800 compared to LTE 800 and thus limiting the coverage area. Comparison of radio parameters RSRP, RSRQ and SINR confirm the coverage difference and its consequence on downlink throughput. Performance of UMTS 900 however was not much different to LTE 800 coverage wise.

The measurements have been carried out on LTE test network at Kuusamo, Finland and the commercial UMTS network set up by TeliaSonera for the comparison of LTE 800 with LTE 1800 and UMTS 900.