Evaluation of Toxicity of Pharmaceuticals to the Activated Sludge Treatment Plant 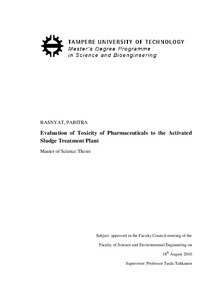 Different toxic pharmaceutical compounds can affect the efficiency of the Biological wastewater treatment plant. Inorder to increase the efficiency of the treatment plant, it is very important to screen these pharmaceuticals for their toxicity towards the activated sludge. Activated sludge is the main component of Biological wastewater treatment system. Therefore, in this work, 50 pharmaceuticals have been tested for their toxicity to the activated sludge. This Masteral Thesis work was done with the support of a pharmaceutical company called Universal Corporation. Pharmaceuticals have been obtained from this Corporation which is located in Nairobi, Kenya. Pharmaceutical industry manufactures many drugs like anti-HIV, anti- malarial, anti-inflammatory, lipid regulators, antibiotics, contraceptives, beta blockers and tranquilizers whose level should be minimum or they should be absent in the treated effluents from the treatment plant. OUR (Oxygen Uptake Rate) method has been used in this process for detecting the toxicity of these chemicals. This is the major principle of this method for the measurement of toxicity of chemicals. The laboratory work was done in the Tampere University of Technology. For this work, OUR (Oxygen Uptake Rate) measurement technique is applied for the toxicity test.The activated sludge was obtained from the Tampere. Oxygen meter WTW Multiline P4 with Oxygen probe CellOx325 device was used to measure the oxygen consumption rate of the activated sludge. The graphs were plotted for all the measurements and the MLSS and MLVSS values were also calculated. In the end, inhibition percentage was calculated for all the tests and EC50 concentration was calculated for the toxic pharmaceuticals. Out of 50 most popular pharmaceuticals, 11 pharmcaeuticals showed the significant inhibition percentage to the activated sludge. Aspirin, Cetrimide, Cetrizine, Chlorpheniramine Maleate, Caffeine Anhydrous, Ephedrine Hcl, Levamisole Hcl, Quinine Dihydrochloride, Diclofenac Sodium and Camphor were found toxic. The EC50 value for Diclofenace Sodium was found 23.7 mg/l. These drugs, due to its toxicity affect the efficiency of the WWTP. /Kir11