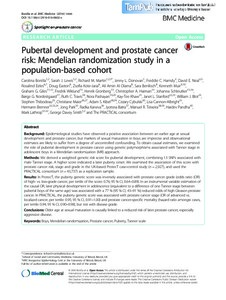 Epidemiological studies have observed a positive association between an earlier age at sexual development and prostate cancer, but markers of sexual maturation in boys are imprecise and observational estimates are likely to suffer from a degree of uncontrolled confounding. To obtain causal estimates, we examined the role of pubertal development in prostate cancer using genetic polymorphisms associated with Tanner stage in adolescent boys in a Mendelian randomization (MR) approach.
METHODS:

We derived a weighted genetic risk score for pubertal development, combining 13 SNPs associated with male Tanner stage. A higher score indicated a later puberty onset. We examined the association of this score with prostate cancer risk, stage and grade in the UK-based ProtecT case-control study (n = 2,927), and used the PRACTICAL consortium (n = 43,737) as a replication sample.
RESULTS: