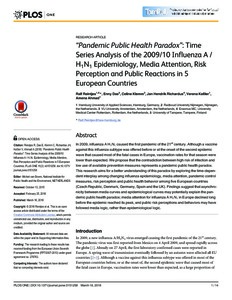 In 2009, influenza A H1N1 caused the first pandemic of the 21st century. Although a vaccine against this influenza subtype was offered before or at the onset of the second epidemic wave that caused most of the fatal cases in Europe, vaccination rates for that season were lower than expected. We propose that the contradiction between high risk of infection and low use of available prevention measures represents a pandemic public health paradox. This research aims for a better understanding of this paradox by exploring the time-dependent interplay among changing influenza epidemiology, media attention, pandemic control measures, risk perception and public health behavior among five European countries (Czech Republic, Denmark, Germany, Spain and the UK). Findings suggest that asynchronicity between media curves and epidemiological curves may potentially explain the pandemic public health paradox; media attention for influenza A H1N1 in Europe declined long before the epidemic reached its peak, and public risk perceptions and behaviors may have followed media logic, rather than epidemiological logic.