A Genome-Wide Association Study of a Biomarker of Nicotine Metabolism 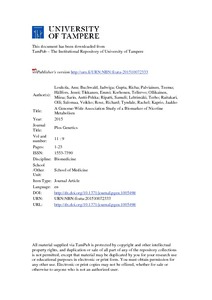 Individuals with fast nicotine metabolism typically smoke more and thus have a greater risk for smoking-induced diseases. Further, the efficacy of smoking cessation pharmacotherapy is dependent on the rate of nicotine metabolism. Our objective was to use nicotine metabolite ratio (NMR), an established biomarker of nicotine metabolism rate, in a genome-wide association study (GWAS) to identify novel genetic variants influencing nicotine metabolism. A heritability estimate of 0.81 (95% CI 0.70–0.88) was obtained for NMR using monozygotic and dizygotic twins of the FinnTwin cohort. We performed a GWAS in cotinine-verified current smokers of three Finnish cohorts (FinnTwin, Young Finns Study, FINRISK2007), followed by a meta-analysis of 1518 subjects, and annotated the genome-wide significant SNPs with methylation quantitative loci (meQTL) analyses. We detected association on 19q13 with 719 SNPs exceeding genome-wide significance within a 4.2 Mb region. The strongest evidence for association emerged for CYP2A6 (min p = 5.77E-86, in intron 4), the main metabolic enzyme for nicotine. Other interesting genes with genome-wide significant signals included CYP2B6, CYP2A7, EGLN2, and NUMBL. Conditional analyses revealed three independent signals on 19q13, all located within or in the immediate vicinity of CYP2A6. A genetic risk score constructed using the independent signals showed association with smoking quantity (p = 0.0019) in two independent Finnish samples. Our meQTL results showed that methylation values of 16 CpG sites within the region are affected by genotypes of the genome-wide significant SNPs, and according to causal inference test, for some of the SNPs the effect on NMR is mediated through methylation. To our knowledge, this is the first GWAS on NMR. Our results enclose three independent novel signals on 19q13.2. The detected CYP2A6 variants explain a strikingly large fraction of variance (up to 31%) in NMR in these study samples. Further, we provide evidence for plausible epigenetic mechanisms influencing NMR.