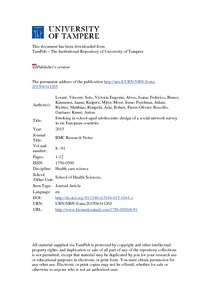 In Western countries, smoking accounts for a large share of socio-economic inequalities in health. As smoking initiation occurs around the age of 13, it is likely that school context and social networks at school play a role in the origin of such inequalities. So far, there has been little generic explanation of how social ties at school contribute to socio-economic inequalities in smoking. The SILNE (Smoking Inequalities – Learning from Natural Experiments) survey was designed to test the hypothesis that a combination of peer effect, homophilous social ties, and school context may explain how smoking inequalities are magnified at school – a theory known as network-induced inequality. In this paper, the survey theory and design are presented.
Findings

The social network survey was carried out in 2013 in six medium-sized European cities with average incomes similar to the national average: Namur (Belgium), Tampere (Finland), Hannover (Germany), Latina (Italy), Amersfoort (The Netherlands), and Coimbra (Portugal). In each city, 6 to 8 schools were selected in a stratified sampling procedure. In each school, two grades in secondary education, corresponding to 14-16-year-olds, were selected. All adolescents in these two grades were invited to participate in the survey. Social ties were reported using the roster approach, in which each adolescent had to nominate up to 5 friends from a directory.

The survey collected information from 11,015 adolescents in 50 schools, out of a total of 13,870 registered adolescents, yielding a participation rate of 79%. The SILNE survey yielded 57,094 social ties, 86.7% of which referred to friends who also participated in the survey.
Discussion

The SILNE survey was designed to measure the association between adolescents’ social ties at school, their socio-economic background, and their smoking behaviour. Two difficulties were encountered, however: legal privacy constraints made it impossible to apply the same parental consent procedure in all countries, leading to somewhat lower participation rates in two cities: Hannover and Latina. It was also difficult to match the 6 cities in terms of both age and type of education.

The SILNE survey provided a comparable database for the study of smoking inequalities across European cities from a social network perspective.