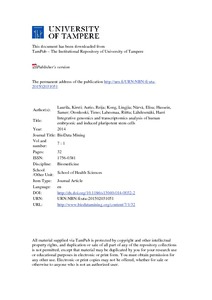 We studied human embryonic stem cells (hESCs) and human induced pluripotent stem cells (hiPSCs) measuring the SNPs and CNVs with Affymetrix SNP 6 microarrays and expression values with Affymetrix Exon microarrays. We computed the linear relationships between SNPs and expression levels of exons, transcripts and genes, and the associations between gene CNVs and gene expression levels. Further, for a few of the resulted genes, the expression value was associated with both CNVs and SNPs. Our results revealed altogether 217 genes and 584 SNPs whose genomic alterations affect the transcriptome in the same cells. We analyzed the enriched pathways and gene ontologies within these groups of genes, and found out that the terms related to alternative splicing and development were enriched.
Conclusions

Our results revealed that in the human pluripotent stem cells, the expression values of several genes, transcripts and exons were affected due to the genomic variation.