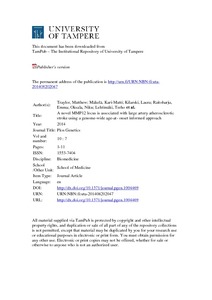 Genome-wide association studies (GWAS) have begun to identify the common genetic component to ischaemic stroke (IS). However, IS has considerable phenotypic heterogeneity. Where clinical covariates explain a large fraction of disease risk, covariate informed designs can increase power to detect associations. As prevalence rates in IS are markedly affected by age, and younger onset cases may have higher genetic predisposition, we investigated whether an age-at-onset informed approach could detect novel associations with IS and its subtypes; cardioembolic (CE), large artery atherosclerosis (LAA) and small vessel disease (SVD) in 6,778 cases of European ancestry and 12,095 ancestry-matched controls. Regression analysis to identify SNP associations was performed on posterior liabilities after conditioning on age-at-onset and affection status. We sought further evidence of an association with LAA in 1,881 cases and 50,817 controls, and examined mRNA expression levels of the nearby genes in atherosclerotic carotid artery plaques. Secondly, we performed permutation analyses to evaluate the extent to which age-at-onset informed analysis improves significance for novel loci. We identified a novel association with an MMP12 locus in LAA (rs660599; p = 2.5×10−7), with independent replication in a second population (p = 0.0048, OR(95% CI) = 1.18(1.05–1.32); meta-analysis p = 2.6×10−8). The nearby gene, MMP12, was significantly overexpressed in carotid plaques compared to atherosclerosis-free control arteries (p = 1.2×10−15; fold change = 335.6). Permutation analyses demonstrated improved significance for associations when accounting for age-at-onset in all four stroke phenotypes (p<0.001). Our results show that a covariate-informed design, by adjusting for age-at-onset of stroke, can detect variants not identified by conventional GWAS.