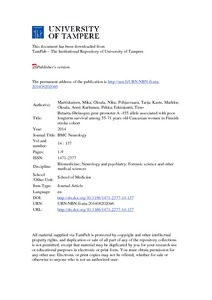 Women die of stroke more often than men. After menopause, the incidence of ischemic stroke increases rapidly. Elevated fibrinogen levels and smoking have been associated with an increased risk of stroke. In gene-cluster haplotype analyses, the beta-fibrinogen (FGB) promoter −455 G/A polymorphic locus was most strongly associated with elevated plasma fibrinogen levels. We investigated whether the FGB −455 G/A polymorphism and smoking might interact with sex on longterm survival of acute stroke sufferers.
Methods

The Stroke Aging Memory (SAM) cohort comprising 486 consecutive stroke patients (55–85 years, 246 men, 240 women) subjected to clinical and MRI examination was followed over 12.5 years. During this period 347 (71.4%) patients died. The genotypes of the FGB −455 G/A polymorphism were determined by PCR.
Results

The FGB −455 G/A polymorphism genotype distributions were 64.7%, 32.1%, and 3.2% for GG, GA, and AA, respectively. During the follow-up, the FGB −455 A + genotype did not associate with survival, nor was there any genotype-by-smoking interaction on poor outcome in the total study population. However, women aged 55–71 years who carried the FGB −455 A-allele showed worse survival regardless of smoking status compared to non-smoking FGB −455 GG homozygotes (non-smokers, crude HR = 5.21, 95% CI: 1.38-19.7; smokers, crude HR = 7.03, 95% CI: 1.81-27.3). This association persisted in adjusted analyses. No such association was observed for women in the oldest age-group, nor among men.
Conclusion

The A + genotype of the FGB −455 G/A polymorphism associated with poor survival among 55–71 years old Caucasian women in the Finnish stroke cohort.