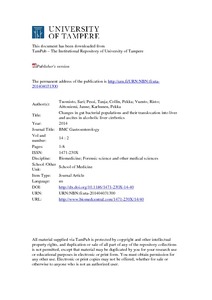 Relative ratios of faecal bacteria in autopsy controls were comparable to those of healthy volunteers. Cirrhotics had in median 27 times more bacterial DNA of Enterobactericaea in faeces compared to the healthy volunteers (p = 0.011). Enterobactericaea were also the most common bacteria translocated into cirrhotic liver, although there were no statistically significant differences between the study groups. Of the ascites samples from the volunteers with liver cirrhosis, 50% contained bacterial DNA from Enterobactericaea, Clostridium leptum group or Lactobacillus spp.. The total bacterial DNA in autopsy liver was associated with the percentage of CD14 expression (p = 0.045). CD14 expression percentage in cirrhotics was significantly higher than in the autopsy controls (p = 0.004).
Conclusions

Our results suggest that translocation of intestinal bacteria into liver may be involved as a one factor in the pathogenesis of alcoholic liver cirrhosis.