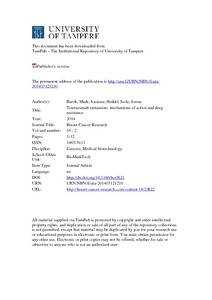 Trastuzumab emtansine (T-DM1) is an antibody-drug conjugate that is effective and generally well tolerated when administered as a single agent to treat advanced breast cancer. Efficacy has now been demonstrated in randomized trials as first line, second line, and later than the second line treatment of advanced breast cancer. T-DM1 is currently being evaluated as adjuvant treatment for early breast cancer. It has several mechanisms of action consisting of the anti-tumor effects of trastuzumab and those of DM1, a cytotoxic anti-microtubule agent released within the target cells upon degradation of the human epidermal growth factor receptor-2 (HER2)-T-DM1 complex in lysosomes. The cytotoxic effect of T-DM1 likely varies depending on the intracellular concentration of DM1 accumulated in cancer cells, high intracellular levels resulting in rapid apoptosis, somewhat lower levels in impaired cellular trafficking and mitotic catastrophe, while the lowest levels lead to poor response to T-DM1. Primary resistance of HER2-positive metastatic breast cancer to T-DM1 appears to be relatively infrequent, but most patients treated with T-DM1 develop acquired drug resistance. The mechanisms of resistance are incompletely understood, but mechanisms limiting the binding of trastuzumab to cancer cells may be involved. The cytotoxic effect of T-DM1 may be impaired by inefficient internalization or enhanced recycling of the HER2-T-DM1 complex in cancer cells, or impaired lysosomal degradation of trastuzumab or intracellular trafficking of HER2. The effect of T-DM1 may also be compromised by multidrug resistance proteins that pump DM1 out of cancer cells. In this review we discuss the mechanism of action of T-DM1 and the key clinical results obtained with it, the combinations of T-DM1 with other cytotoxic agents and anti-HER drugs, and the potential resistance mechanisms and the strategies to overcome resistance to T-DM1.