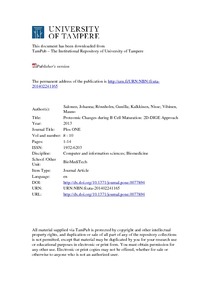 B cells play a pivotal role in adaptive immune system, since they maintain a delicate balance between recognition and clearance of foreign pathogens and tolerance to self. During maturation, B cells progress through a series of developmental stages defined by specific phenotypic surface markers and the rearrangement and expression of immunoglobulin (Ig) genes. To get insight into B cell proteome during the maturation pathway, we studied differential protein expression in eight human cell lines, which cover four distinctive developmental stages; early pre-B, pre-B, plasma cell and immature B cell upon anti-IgM stimulation. Our two-dimensional differential gel electrophoresis (2D-DIGE) and mass spectrometry based proteomic study indicates the involvement of large number of proteins with various functions. Notably, proteins related to cytoskeleton were relatively highly expressed in early pre-B and pre-B cells, whereas plasma cell proteome contained endoplasmic reticulum and Golgi system proteins. Our long time series analysis in anti-IgM stimulated Ramos B cells revealed the dynamic regulation of cytoskeleton organization, gene expression and metabolic pathways, among others. The findings are related to cellular processes in B cells and are discussed in relation to experimental information for the proteins and pathways they are involved in. Representative 2D-DIGE maps of different B cell maturation stages are available online at http://structure.bmc.lu.se/BcellProteome​/.