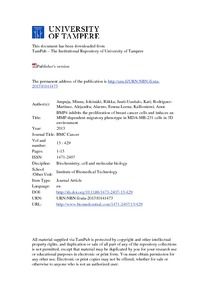 Bone morphogenetic protein 4 (BMP4) belongs to the transforming growth factor β (TGF-β) family of proteins. BMPs regulate cell proliferation, differentiation and motility, and have also been reported to be involved in cancer pathogenesis. We have previously shown that BMP4 reduces breast cancer cell proliferation through G1 cell cycle arrest and simultaneously induces migration in a subset of these cell lines. Here we examined the effects of BMP4 in a more physiological environment, in a 3D culture system.
Methods

The MCF-10A normal breast epithelial cells formed round acini with correct apicobasal localization of α6 integrin in Matrigel whereas irregular structures were seen in PEG gel. The two 3D matrices also supported dissimilar morphology for the breast cancer cells. In PEG gel, BMP4 inhibited the growth of MCF-10A and the three breast cancer cell lines examined, thus closely resembling the 2D culture conditions, but in Matrigel, no growth inhibition was observed in MDA-MB-231 and MDA-MB-361 cells. Furthermore, BMP4 induced the expression of the cell cycle inhibitor p21 both in 2D and 3D culture, thereby partly explaining the growth arrest. Interestingly, MDA-MB-231 cells formed large branching, stellate structures in response to BMP4 treatment in Matrigel, suggestive of increased cell migration or invasion. This effect was reversed by Batimastat, a broad-spectrum MMP inhibitor, and subsequent analyses showed BMP4 to induce the expression of MMP3 and MMP14, that are thus likely to be responsible for the stellate phenotype.
Conclusions