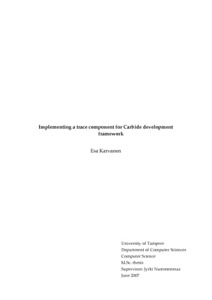 This thesis introduces a trace component named TraceViewer which is a plug-in for Carbide development framework. TraceViewer is able to receive, manipulate and view traces received from a smartphone. The thesis presents some background information about Carbide.c++ framework. A tracing concept, Open System Trace, used in TraceViewer is also introduced.

TraceViewer is described by going through the requirements, architecture and design phases which will give a good overview about the software.