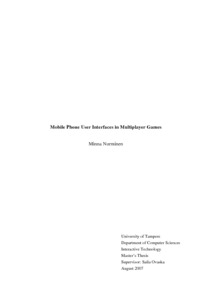 This study focuses on the user interface elements of mobile phones and their qualities in multiplayer games. Mobile phone is not intended as a gaming device. Therefore its technology has many shortcomings when it comes to playing mobile games on the device. One of those is the non-standardized user interface design. However, it has also some strengths, such as the portability and networked nature. In addition, many mobile phone models today have a camera, a feature only few gaming devices have.

The design of the keypad and joystick has an effect, especially, on multiplayer games, because the players playing against each other rarely have the same phone models. The user interface elements’ effect on playing mobile multiplayer games was studied with a within subjects test, where participants played five different types of multiplayer games with three mobile camera phones. The game results were analysed based on log data. Also, the participants gave their own evaluations based on their experiences.

The results show that a game that is based on steering and selection benefits from a phone model that has a joystick. A small keypad seems to fit typing games very well. Games using typing as their method of interaction are affected the most of all games by the player’s experience with typing text messages. Picture taking as a game interaction method suits all phone models from the user interface point of view. These interaction methods are also very well suited for the growing number of casual players. However, the user interface elements are not the only factors affecting performance. The speed of the phone’s hardware and software affect gaming performance in addition to the player’s experience in mobile phones and gaming on other devices.