Adolescents expressing school massacre threats online: something to be extremely worried about? 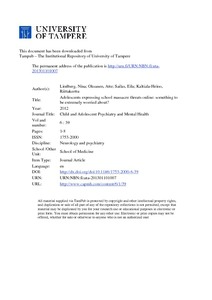 Child and Adolescent Psychiatry and Mental Health 6
39
This publication is copyrighted. You may download, display and print it for Your own personal use. Commercial use is prohibited.

Peer groups identified through the Internet have played an important role in facilitating school shootings. The aim of the present study was to determine whether the adolescents who had expressed a school massacre threat online differed from those who had expressed one offline.
Methods

A nationwide explorative study was conducted on a group of 77 13- to 18-year-old adolescents sent for adolescent psychiatric evaluation between November 2007 and June 2009 by their general practitioners because they had threatened to carry out a school massacre. According to the referrals and medical files, 17 adolescents expressed the threat online and 60 did so offline.
Results

The adolescents who expressed their threats online were more likely to be bullied and depressed, had more often pronounced the threat with clear intention and had more often made preparations to carry out the act. In contrast, the adolescents who expressed their threats offline were more likely to have problems with impulse control and had showed delinquent behavior prior to the massacre threats.
Conclusions