Analysis of Jak2 Catalytic Function by Peptide Microarrays: The Role of the JH2 Domain and V617F Mutation 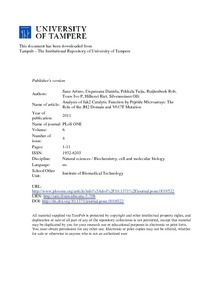 Janus kinase 2 (JAK2) initiates signaling from several cytokine receptors and is required for biological responses such as erythropoiesis. JAK2 activity is controlled by regulatory proteins such as Suppressor of Cytokine Signaling (SOCS) proteins and protein tyrosine phosphatases. JAK2 activity is also intrinsically controlled by regulatory domains, where the pseudokinase (JAK homology 2, JH2) domain has been shown to play an essential role. The physiological role of the JH2 domain in the regulation of JAK2 activity was highlighted by the discovery of the acquired missense point mutation V617F in myeloproliferative neoplasms (MPN). Hence, determining the precise role of this domain is critical for understanding disease pathogenesis and design of new treatment modalities. Here, we have evaluated the effect of inter-domain interactions in kinase activity and substrate specificity. By using for the first time purified recombinant JAK2 proteins and a novel peptide micro-array platform, we have determined initial phosphorylation rates and peptide substrate preference for the recombinant kinase domain (JH1) of JAK2, and two constructs comprising both the kinase and pseudokinase domains (JH1-JH2) of JAK2. The data demonstrate that (i) JH2 drastically decreases the activity of the JAK2 JH1 domain, (ii) JH2 increased the Km for ATP (iii) JH2 modulates the peptide preference of JAK2 (iv) the V617F mutation partially releases this inhibitory mechanism but does not significantly affect substrate preference or Km for ATP. These results provide the biochemical basis for understanding the interaction between the kinase and the pseudokinase domain of JAK2 and identify a novel regulatory role for the JAK2 pseudokinase domain. Additionally, this method can be used to identify new regulatory mechanisms for protein kinases that provide a better platform for designing specific strategies for therapeutic approaches.