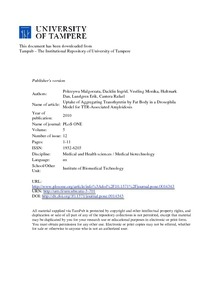 A functional link has been established between the severe neurodegenerative disorder Familial amyloidotic polyneuropathy and the enhanced propensity of the plasma protein transthyretin (TTR) to form aggregates in patients with single point mutations in the TTR gene. Previous work has led to the establishment of an experimental model based on transgenic expression of normal or mutant forms of human TTR in Drosophila flies. Remarkably, the severity of the phenotype was greater in flies that expressed a single copy than with two copies of the mutated gene.

In this study, we analyze the distribution of normal and mutant TTR in transgenic flies, and the ultrastructure of TTR-positive tissues to clarify if aggregates and/or amyloid filaments are formed. We report the formation of intracellular aggregates of 20 nm spherules and amyloid filaments in thoracic adipose tissue and in brain glia, two tissues that do not express the transgene. The formation of aggregates of nanospherules increased with age and was more considerable in flies with two copies of mutated TTR. Treatment of human neuronal cells with protein extracts prepared from TTR flies of different age showed that the extracts from older flies were less toxic than those from younger flies.

These findings suggest that the uptake of TTR from the circulation and its subsequent segregation into cytoplasmic quasi-crystalline arrays of nanospherules is part of a mechanism that neutralizes the toxic effect of TTR.