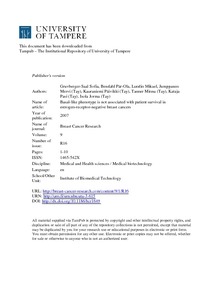 From the 375 analyzable tumor specimens, 48 (13%) were immunohistochemically positive for CK5/14. We found adverse distant disease-free survival for the CK5/14-positive tumors during the first years (3 years hazard ratio (HR) 2.23, 95% confidence interval (CI) 1.17 to 4.24, p = 0.01; 5 years HR 1.80, 95% CI 1.02 to 3.15, p = 0.04) but the significance was lost at the end of the follow-up period (10 years HR 1.43, 95% CI 0.84 to 2.43, p = 0.19). Gene expression profiles of immunohistochemically determined CK5/14-positive tumors within the ER-negative tumor group implicated 1,713 differently expressed genes (p < 0.05). Hierarchical clustering analysis with the top 500 of these genes formed one basal-like and a non-basal-like cluster also within the ER-negative tumor entity. A highly concordant classification could be constructed with a published gene set (Sorlie's intrinsic gene set, concordance 90%). Both gene sets identified a basal-like cluster that included most of the CK5/14-positive tumors, but also immunohistochemically CK5/14-negative tumors. Within the ER-negative tumor entity there was no survival difference between the non-basal and basal-like tumors as identified by immunohistochemical or gene-expression-based classification.