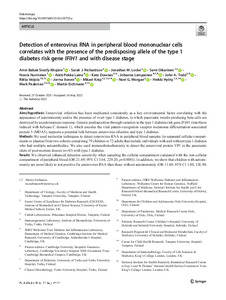 Aims/hypothesis: Enteroviral infection has been implicated consistently as a key environmental factor correlating with the appearance of autoimmunity and/or the presence of overt type 1 diabetes, in which pancreatic insulin-producing beta cells are destroyed by an autoimmune response. Genetic predisposition through variation in the type 1 diabetes risk gene IFIH1 (interferon induced with helicase C domain 1), which encodes the viral pattern-recognition receptor melanoma differentiation-associated protein 5 (MDA5), supports a potential link between enterovirus infection and type 1 diabetes. Methods: We used molecular techniques to detect enterovirus RNA in peripheral blood samples (in separated cellular compartments or plasma) from two cohorts comprising 79 children or 72 adults that include individuals with and without type 1 diabetes who had multiple autoantibodies. We also used immunohistochemistry to detect the enteroviral protein VP1 in the pancreatic islets of post-mortem donors (n=43) with type 1 diabetes. Results: We observed enhanced detection sensitivity when sampling the cellular compartment compared with the non-cellular compartment of peripheral blood (OR 21.69; 95% CI 3.64, 229.20; p<0.0001). In addition, we show that children with autoimmunity are more likely to test positive for enterovirus RNA than those without autoimmunity (OR 11.60; 95% CI 1.89, 126.90; p=0.0065). Furthermore, we found that individuals carrying the predisposing allele (946Thr) of the common variant in IFIH1 (rs1990760, Thr946Ala) are more likely to test positive for enterovirus in peripheral blood (OR 3.07; 95% CI 1.02, 8.58; p=0.045). In contrast, using immunohistochemistry, there was no correlation between the common variant in IFIH1 and detection of enteroviral VP1 protein in the pancreatic islets of donors with type 1 diabetes. Conclusions/interpretation: Our data indicate that, in peripheral blood, antigen-presenting cells are the predominant source of enterovirus infection, and that infection is correlated with disease stage and genetic predisposition, thereby supporting a role for enterovirus infection prior to disease onset. Graphical abstract: [Figure not available: see fulltext.]