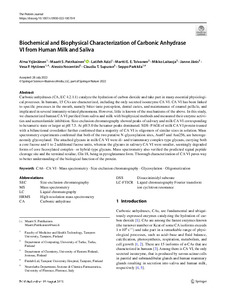 Carbonic anhydrases (CA, EC 4.2.1.1) catalyze the hydration of carbon dioxide and take part in many essential physiological processes. In humans, 15 CAs are characterized, including the only secreted isoenzyme CA VI. CA VI has been linked to specific processes in the mouth, namely bitter taste perception, dental caries, and maintenance of enamel pellicle, and implicated in several immunity-related phenomena. However, little is known of the mechanisms of the above. In this study, we characterized human CA VI purified from saliva and milk with biophysical methods and measured their enzyme activities and acetazolamide inhibition. Size-exclusion chromatography showed peaks of salivary and milk CA VI corresponding to hexameric state or larger at pH 7.5. At pH 5.0 the hexamer peaks dominated. SDS- PAGE of milk CA VI protein treated with a bifunctional crosslinker further confirmed that a majority of CA VI is oligomers of similar sizes in solution. Mass spectrometry experiments confirmed that both of the two putative N-glycosylation sites, Asn67 and Asn256, are heterogeneously glycosylated. The attached glycans in milk CA VI were di- and triantennary complex-type glycans, carrying both a core fucose and 1 to 2 additional fucose units, whereas the glycans in salivary CA VI were smaller, seemingly degraded forms of core fucosylated complex- or hybrid-type glycans. Mass spectrometry also verified the predicted signal peptide cleavage site and the terminal residue, Gln 18, being in pyroglutamate form. Thorough characterization of CA VI paves way to better understanding of the biological function of the protein.