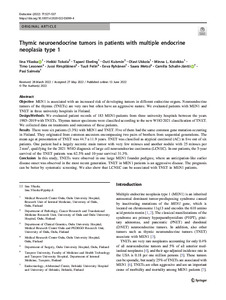 Objective: MEN1 is associated with an increased risk of developing tumors in different endocrine organs. Neuroendocrine tumors of the thymus (TNETs) are very rare but often have an aggressive nature. We evaluated patients with MEN1 and TNET in three university hospitals in Finland. Design/Methods: We evaluated patient records of 183 MEN1-patients from three university hospitals between the years 1985–2019 with TNETs. Thymus tumor specimens were classified according to the new WHO 2021 classification of TNET. We collected data on treatments and outcomes of these patients. Results: There were six patients (3.3%) with MEN1 and TNET. Five of them had the same common gene mutation occurring in Finland. They originated from common ancestors encompassing two pairs of brothers from sequential generations. The mean age at presentation of TNET was 44.7 ± 11.9 years. TNET was classified as atypical carcinoid (AC) in five out of six patients. One patient had a largely necrotic main tumor with very few mitoses and another nodule with 25 mitoses per 2 mm2, qualifying for the 2021 WHO diagnosis of large cell neuroendocrine carcinoma (LCNEC). In our patients, the 5-year survival of the TNET patients was 62.5% and 10-year survival 31.3%. Conclusion: In this study, TNETs were observed in one large MEN1 founder pedigree, where an anticipation-like earlier disease onset was observed in the most recent generation. TNET in MEN1 patients is an aggressive disease. The prognosis can be better by systematic screening. We also show that LCNEC can be associated with TNET in MEN1 patients.