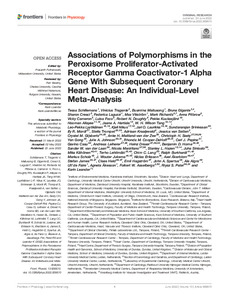 Background: The knowledge of factors influencing disease progression in patients with established coronary heart disease (CHD) is still relatively limited. One potential pathway is related to peroxisome proliferator–activated receptor gamma coactivator-1 alpha (PPARGC1A), a transcription factor linked to energy metabolism which may play a role in the heart function. Thus, its associations with subsequent CHD events remain unclear. We aimed to investigate the effect of three different SNPs in the PPARGC1A gene on the risk of subsequent CHD in a population with established CHD. Methods: We employed an individual-level meta-analysis using 23 studies from the GENetIcs of sUbSequent Coronary Heart Disease (GENIUS-CHD) consortium, which included participants (n = 80,900) with either acute coronary syndrome, stable CHD, or a mixture of both at baseline. Three variants in the PPARGC1A gene (rs8192678, G482S; rs7672915, intron 2; and rs3755863, T528T) were tested for their associations with subsequent events during the follow-up using a Cox proportional hazards model adjusted for age and sex. The primary outcome was subsequent CHD death or myocardial infarction (CHD death/myocardial infarction). Stratified analyses of the participant or study characteristics as well as additional analyses for secondary outcomes of specific cardiovascular disease diagnoses and all-cause death were also performed. Results: Meta-analysis revealed no significant association between any of the three variants in the PPARGC1A gene and the primary outcome of CHD death/myocardial infarction among those with established CHD at baseline: rs8192678, hazard ratio (HR): 1.01, 95% confidence interval (CI) 0.98–1.05 and rs7672915, HR: 0.97, 95% CI 0.94–1.00; rs3755863, HR: 1.02, 95% CI 0.99–1.06. Similarly, no significant associations were observed for any of the secondary outcomes. The results from stratified analyses showed null results, except for significant inverse associations between rs7672915 (intron 2) and the primary outcome among 1) individuals aged ≥65, 2) individuals with renal impairment, and 3) antiplatelet users. Conclusion: We found no clear associations between polymorphisms in the PPARGC1A gene and subsequent CHD events in patients with established CHD at baseline.