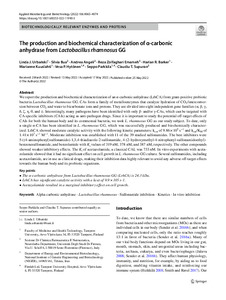 Abstract: We report the production and biochemical characterization of an α-carbonic anhydrase (LrhCA) from gram-positive probiotic bacteria Lactobacillus rhamnosus GG. CAs form a family of metalloenzymes that catalyze hydration of CO2/interconversion between CO2 and water to bicarbonate ions and protons. They are divided into eight independent gene families (α, β, γ, δ, ζ, η, θ, and ι). Interestingly, many pathogens have been identified with only β- and/or γ-CAs, which can be targeted with CA-specific inhibitors (CAIs) acting as anti-pathogen drugs. Since it is important to study the potential off-target effects of CAIs for both the human body and its commensal bacteria, we took L. rhamnosus GG as our study subject. To date, only a single α-CA has been identified in L. rhamnosus GG, which was successfully produced and biochemically characterized. LrhCA showed moderate catalytic activity with the following kinetic parameters: kcat of 9.86 × 105 s−1 and kcat/KM of 1.41 × 107 s−1 M−1. Moderate inhibition was established with 11 of the 39 studied sulfonamides. The best inhibitors were 5-((4-aminophenyl)sulfonamido)-1,3,4-thiadiazole-2-sulfonamide, 4-(2-hydroxymethyl-4-nitrophenyl-sulfonamidoethyl)-benzenesulfonamide, and benzolamide with Ki values of 319 nM, 378 nM, and 387 nM, respectively. The other compounds showed weaker inhibitory effects. The Ki of acetazolamide, a classical CAI, was 733 nM. In vitro experiments with acetazolamide showed that it had no significant effect on cell growth in L. rhamnosus GG culture. Several sulfonamides, including acetazolamide, are in use as clinical drugs, making their inhibition data highly relevant to avoid any adverse off-target effects towards the human body and its probiotic organisms. Key points: • The α-carbonic anhydrase from Lactobacillus rhamnosus GG (LrhCA) is 24.3 kDa. • LrhCA has significant catalytic activity with a kcat of 9.9 × 105 s-1. • Acetazolamide resulted in a marginal inhibitory effect on cell growth.