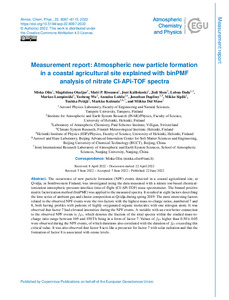 The occurrence of new particle formation (NPF) events detected in a coastal agricultural site, at Qvidja, in Southwestern Finland, was investigated using the data measured with a nitrate ion-based chemical-ionization atmospheric-pressure-interface time-of-flight (CI-APi-TOF) mass spectrometer. The binned positive matrix factorization method (binPMF) was applied to the measured spectra. It resulted in eight factors describing the time series of ambient gas and cluster composition at Qvidja during spring 2019. The most interesting factors related to the observed NPF events were the two factors with the highest mass-to-charge ratios, numbered 7 and 8, both having profiles with patterns of highly oxygenated organic molecules with one nitrogen atom. It was observed that factor 7 had elevated intensities during the NPF events. A variable with an even better connection to the observed NPF events is fF7, which denotes the fraction of the total spectra within the studied mass-to-charge ratio range between 169 and 450 Th being in a form of factor 7. Values of fF7 higher than 0.50±0.05 were observed during the NPF events, of which durations also correlated with the duration of fF7 exceeding this critical value. It was also observed that factor 8 acts like a precursor for factor 7 with solar radiation and that the formation of factor 8 is associated with ozone levels.