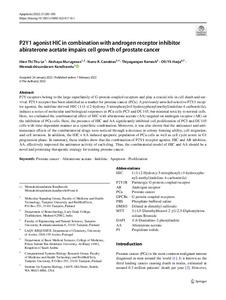 P2Y receptors belong to the large superfamily of G-protein-coupled receptors and play a crucial role in cell death and survival. P2Y1 receptor has been identified as a marker for prostate cancer (PCa). A previously unveiled selective P2Y1 receptor agonist, the indoline-derived HIC (1-(1-((2-hydroxy-5-nitrophenyl)(4-hydroxyphenyl)methyl)indoline-4-carbonitrile), induces a series of molecular and biological responses in PCa cells PC3 and DU145, but minimal toxicity to normal cells. Here, we evaluated the combinatorial effect of HIC with abiraterone acetate (AA) targeted on androgen receptor (AR) on the inhibition of PCa cells. Here, the presence of HIC and AA significantly inhibited cell proliferation of PC3 and DU145 cells with time-dependent manner as a synerfistic combination. Moreover, it was also shown that the anticancer and antimetastasis effects of the combinratorial drugs were noticed through a decrease in colony-forming ability, cell migration, and cell invasion. In addition, the HIC + AA induced apoptotic population of PCa cells as well as cell cycle arrest in G1 progression phase. In summary, these studies show that the combination of P2Y1 receptor agonist, HIC and AR inhibitor, AA, effectively improved the antitumor activity of each drug. Thus, the combinatorial model of HIC and AA should be a novel and promising therapeutic strategy for treating prostate cancer.