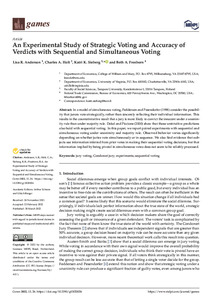 In a model of simultaneous voting, Feddersen and Pesendorfer (1998) consider the possibility that jurors vote strategically, rather than sincerely reflecting their individual information. This results in the counterintuitive result that a jury is more likely to convict the innocent under a unanimity rule than under majority rule. Dekel and Piccione (2000) show that those unintuitive predictions also hold with sequential voting. In this paper, we report paired experiments with sequential and simultaneous voting under unanimity and majority rule. Observed behavior varies significantly depending on whether juries vote simultaneously or in sequence. We also find evidence that subjects use information inferred from prior votes in making their sequential voting decisions, but that information implied by being pivotal in simultaneous votes does not seem to be reliably processed.