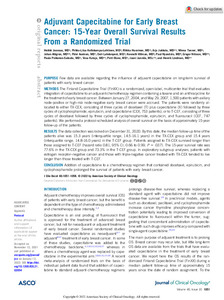 PURPOSE Few data are available regarding the influence of adjuvant capecitabine on long-term survival of patients with early breast cancer. METHODS The Finland Capecitabine Trial (FinXX) is a randomized, open-label, multicenter trial that evaluates integration of capecitabine to an adjuvant chemotherapy regimen containing a taxane and an anthracycline for the treatment of early breast cancer. Between January 27, 2004, and May 29, 2007, 1,500 patients with axillary node-positive or high-risk node-negative early breast cancer were accrued. The patients were randomly allocated to either TX-CEX, consisting of three cycles of docetaxel (T) plus capecitabine (X) followed by three cycles of cyclophosphamide, epirubicin, and capecitabine (CEX, 753 patients), or to T-CEF, consisting of three cycles of docetaxel followed by three cycles of cyclophosphamide, epirubicin, and fluorouracil (CEF, 747 patients). We performed a protocol-scheduled analysis of overall survival on the basis of approximately 15-year follow-up of the patients. RESULTS The data collection was locked on December 31, 2020. By this date, the median follow-up time of the patients alive was 15.3 years (interquartile range, 14.5-16.1 years) in the TX-CEX group and 15.4 years (interquartile range, 14.8-16.0 years) in the T-CEF group. Patients assigned to TX-CEX survived longer than those assigned to T-CEF (hazard ratio 0.81; 95% CI, 0.66 to 0.99; P = .037). The 15-year survival rate was 77.6% in the TX-CEX group and 73.3% in the T-CEF group. In exploratory subgroup analyses, patients with estrogen receptor-negative cancer and those with triple-negative cancer treated with TX-CEX tended to live longer than those treated with T-CEF. CONCLUSION Addition of capecitabine to a chemotherapy regimen that contained docetaxel, epirubicin, and cyclophosphamide prolonged the survival of patients with early breast cancer.