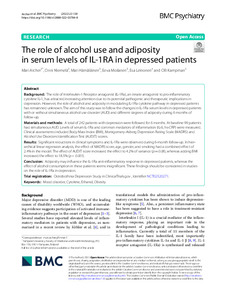 Background: The role of Interleukin-1 Receptor antagonist (IL-1Ra), an innate antagonist to pro-inflammatory cytokine IL-1, has attracted increasing attention due to its potential pathogenic and therapeutic implications in depression. However, the role of alcohol and adiposity in modulating IL-1Ra cytokine pathway in depressed patients has remainned unknown. The aim of this study was to follow the changes in IL-1Ra serum levels in depressed patients with or without simultaneous alcohol use disorder (AUD) and different degrees of adiposity during 6 months of follow-up. Materials and methods: A total of 242 patients with depression were followed for 6 months. At baseline 99 patients had simultaneous AUD. Levels of serum IL-1Ra and common mediators of inflammation (IL-6, hs-CRP) were measured. Clinical assessments included Body Mass Index (BMI), Montgomery-Asberg Depression Rating Scale (MADRS) and Alcohol Use Disorders Identification Test (AUDIT) scores. Results: Significant reductions in clinical symptoms and IL-1Ra were observed during 6-month follow-up. In hierarchical linear regression analysis, the effect of MADRS score, age, gender, and smoking had a combined effect of 2.4% in the model. The effect of AUDIT score increased the effect to 4.2% of variance (p = 0.08), whereas adding BMI increased the effect to 18.5% (p < 0.001). Conclusion: Adiposity may influence the IL-1Ra anti-inflammatory response in depressed patients, whereas the effect of alcohol consumption in these patients seems insignificant. These findings should be considered in studies on the role of IL-1Ra in depression. Trial registration: Ostrobothnia Depression Study in ClinicalTrials.gov , Identifier NCT02520271.