Latent profile analysis as a method for process evaluations : Discovering response subgroups in a mindfulness intervention 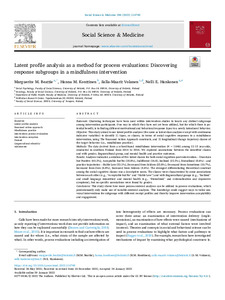 Rationale: Clustering techniques have been used within intervention studies to locate any distinct subgroups among intervention participants. One way in which they have not yet been utilized, but for which there is potential benefit, is in finding different motivational and behavioral response types to a newly introduced behavior. Objective: This study aimed to use latent profile analyses (the same as latent class analyses except with continuous indicator variables) to identify 1) types, or classes, in terms of social cognitive responses to a mindfulness intervention, using The Reasoned Action Approach constructs, and 2) longitudinal/change trajectory classes of the target behavior (i.e., mindfulness practice). Methods: The data derived from a school-based mindfulness intervention (N = 1646) among 12-15 year-olds, conducted in southern Finland from 2014 to 2016. We explored associations between the identified classes and with gender, linguocultural group, and mental health and practice outcomes. Results: Analyses indicated a solution of five latent classes for both social cognition post-intervention—Uncertain but Positive (40.2%), Acceptable but No (18.8%), Indifferent (16.8), Inclined (15.5%), Disinclined (8.6%)—and practice trajectories—Stable Low (52.1%), Decreased from Seldom (25.8%), Decreased from Sometimes (10.7%), Increased from Zero (6.8%), Increased from Seldom (4.6%). The strongest differentiating theoretical construct among the social cognitive classes was a descriptive norm. The classes were characterized by some associations between each other (e.g., “Acceptable but No” and “Stable Low”) and with linguocultural groups (e.g., “Inclined” and small language minorities) and mental health (e.g., “Disinclined” and externalization and depressive symptoms), but no specific associations were found by gender. Conclusions: This study shows how more person-centered analyses can be utilized in process evaluations, which predominantly only make use of variable-centered analyses. This knowledge could suggest ways to tailor universal interventions for subgroups with different receipt profiles and thereby improve intervention acceptability and engagement.