The Embodied Work of Repairing-for-Teasing in Everyday L2 Talk 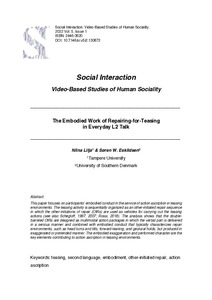 This paper focuses on participants’ embodied conduct in the service of action ascription in teasing environments. The teasing activity is sequentially organized as an other-initiated repair sequence in which the other-initiations of repair (OIRs) are used as vehicles for carrying out the teasing actions (see also Schegloff, 1997, 2007; Rossi, 2018). The analysis shows that the double-barreled OIRs are designed as multimodal action packages in which the verbal part is delivered in a serious manner and combined with embodied conduct that typically characterizes repair environments, such as head turns and tilts, forward-leaning, and gestural holds, but produced in exaggerated or pretended manner. The embodied exaggeration and performed character are the key elements contributing to action ascription in teasing environments.