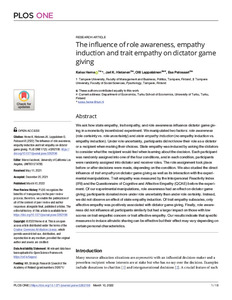 We ask how state empathy, trait empathy, and role awareness influence dictator game giving in a monetarily incentivized experiment. We manipulated two factors: role awareness (role certainty vs. role uncertainty) and state empathy induction (no empathy induction vs. empathy induction). Under role uncertainty, participants did not know their role as a dictator or a recipient when making their choices. State empathy was induced by asking the dictators to consider what the recipient would feel when learning about the decision. Each participant was randomly assigned into one of the four conditions, and in each condition, participants were randomly assigned into dictator and receiver roles. The role assignment took place before or after decisions were made, depending on the condition. We also studied the direct influence of trait empathy on dictator game giving as well as its interaction with the experimental manipulations. Trait empathy was measured by the Interpersonal Reactivity Index (IRI) and the Questionnaire of Cognitive and Affective Empathy (QCAE) before the experiment. Of our experimental manipulations, role awareness had an effect on dictator game giving; participants donated more under role uncertainty than under role certainty. Instead, we did not observe an effect of state empathy induction. Of trait empathy subscales, only affective empathy was positively associated with dictator game giving. Finally, role awareness did not influence all participants similarly but had a larger impact on those with low scores on trait empathic concern or trait affective empathy. Our results indicate that specific measures to induce altruistic sharing can be effective but their effect may vary depending on certain personal characteristics.