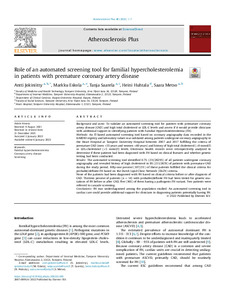 Background and aims: To validate an automated screening tool for patients with premature coronary artery disease (CAD) and high total cholesterol or LDL-C levels and assess if it would provide clinicians with additional support in identifying patients with Familial Hypercholesterolemia (FH). Methods: An IT-based automated screening tool based on coronary angiography data recorded in the KARDIO registry and laboratory values was validated among patients undergone coronary angiography in the Heart Hospital at Tampere University Hospital between 2007 and 2017 fulfilling the criteria of premature CAD (men <55 years and women <60 years) and history of high total cholesterol (>8 mmol/l) or LDL-cholesterol (>5 mmol/l) levels. Electronic health records were retrospectively analyzed to determine if these patients had been diagnosed with FH based on clinical features and whether genetic testing had been conducted. Results: The automated screening tool identified 0.7% (211/28295) of all patients undergone coronary angiography and revealed history of high cholesterol in 8% (211/2678) of patients with premature CAD during the study period. Fifty-one percent (107/211) of these patients fulfilled the clinical criteria for probable/definite FH based on the Dutch Lipid Clinic Network (DLCN) criteria. None of the patients had been diagnosed with FH based on clinical criteria before or after diagnosis of CAD. Thirteen percent of patients (n = 14) with probable/definite FH had been tested for genetic mutations of FH before or after CAD, five (36%) of them having a pathogenic FH variant. Two patients were referred to cascade screening. Conclusions: FH was underdiagnosed among the population studied. An automated screening tool in cardiac care could provide additional support for clinicians in diagnosing patients potentially having FH.