Regulatory voids in the prevention of environmental crime in Finland 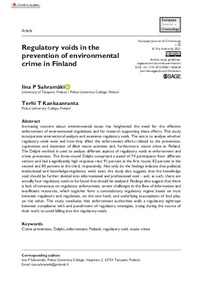 Increasing concern about environmental issues has heightened the need for the effective enforcement of environmental regulations and for research supporting these efforts. This study incorporates intersectoral analysis and examines regulatory voids. The aim is to analyse whether regulatory voids exist and how they affect the enforcement efforts related to the prevention, supervision and detection of illicit waste activities and, furthermore, waste crime in Finland. The Delphi method is used to analyse different aspects of regulatory voids in enforcement and crime prevention. The three-round Delphi comprised a panel of 74 participants from different sectors and had a significantly high response rate: 91 percent in the first round, 82 percent in the second and 80 percent in the third, respectively. Not only do the findings indicate that political, institutional and knowledge-regulatory voids exist, the study also suggests that the knowledge void should be further divided into informational and professional void – and, as such, there are actually four regulatory voids to be found that should be analysed. Findings also suggest that there is lack of consensus on regulatory enforcement, severe challenges in the flow of information and insufficient resources, which together form a contradictory regulatory regime based on trust between regulators and regulatees, on the one hand, and underlying assumptions of foul play, on the other. The study concludes that enforcement authorities walk a regulatory tightrope between compliance with and punishment of regulatory strategies, trying during the course of their work to avoid falling into the regulatory voids.