Long-term morbidity and mortality in patients diagnosed with an insulinoma 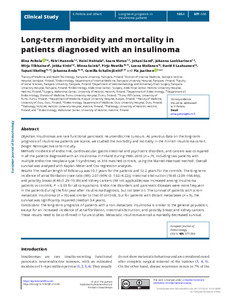 Objective: Insulinomas are rare functional pancreatic neuroendocrine tumours. As previous data on the long-term prognosis of insulinoma patients are scarce, we studied the morbidity and mortality in the Finnish insulinoma cohort. Design: Retrospective cohort study. Methods: Incidence of endocrine, cardiovascular, gastrointestinal and psychiatric disorders, and cancers was compared in all the patients diagnosed with an insulinoma in Finland during 1980-2010 (n = 79, including two patients with multiple endocrine neoplasia type 1 syndrome), vs 316 matched controls, using the Mantel-Haenszel method. Overall survival was analysed with Kaplan-Meier and Cox regression analyses. Results: The median length of follow-up was 10.7 years for the patients and 12.2 years for the controls. The long-term incidence of atrial fibrillation (rate ratio (RR): 2.07 (95% CI: 1.02-4.22)), intestinal obstruction (18.65 (2.09-166.86)), and possibly breast (4.46 (1.29-15.39) and kidney cancers (RR not applicable) was increased among insulinoma patients vs controls, P < 0.05 for all comparisons. Endocrine disorders and pancreatic diseases were more frequent in the patients during the first year after insulinoma diagnosis, but not later on. The survival of patients with a non-metastatic insulinoma (n = 70) was similar to that of controls, but for patients with distant metastases (n = 9), the survival was significantly impaired (median 3.4 years). Conclusions: The long-term prognosis of patients with a non-metastatic insulinoma is similar to the general population, except for an increased incidence of atrial fibrillation, intestinal obstruction, and possibly breast and kidney cancers. These results need to be confirmed in future studies. Metastatic insulinomas entail a markedly decreased survival.