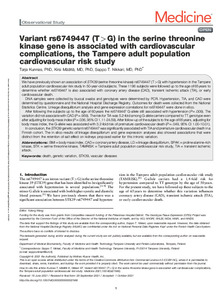 ABSTRACT: We have previously shown an association of STK39 (serine threonine kinase) rs6749447 (T > G) with hypertension in the Tampere adult population cardiovascular risk study in 50-year-old subjects. These 1196 subjects were followed up to the age of 65 years to determine whether rs6749447 is also associated with coronary artery disease (CAD), transient ischemic attack (TIA), or early cardiovascular death.DNA samples were collected by buccal swabs and genotypes were determined by PCR. Hypertension, TIA, and CAD were determined by questionnaire and the National Hospital Discharge Registry. Outcomes for death were collected from the National Statistics Centre. Linkage disequilibrium analysis and gene expression correlations for rs6749447 were done in silico.After following the subjects up to the age of 60 years the rs6749447 G-allele still associated with hypertension (P = .009). The variation did not associate with CAD (P = .959). The risk for TIA was 5.2-fold among G-allele carriers compared to TT genotype even after adjusting for body mass index (P = .036, 95% CI 1.11-24.59). After follow-up of the subjects to the age of 65 years, adjusting for body mass index, the G-allele was associated with 3.2-fold risk of premature cardiovascular death (P = .049, 95% CI 1.00-10.01).In conclusion, the STK39 genetic variant rs6749447 was significantly associated with TIA and premature cardiovascular death in a Finnish cohort. The in silico results of linkage disequilibrium and gene expression analyses also showed associations that were distinct from the retention of salt effect on kidneys proposed earlier for this intronic variation.